Where is the Tan in a Turning Tan/Punch? 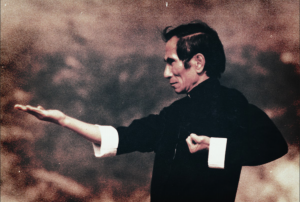 If I were to choose the three most important techniques of Wing Chun, I would probably say:

I chose these because:

1 – The Tan Sau shape can be connected to nearly all of the defensive shapes within Wing chun, by this I mean, if we cover the hand of a Tan then the rest of the arm could be a high Garn, a Jum, Jut, Gum, Biu and so on.

2 – Punches, well this one is pretty obvious, it’s ok defending but not if you have nothing to attack back with.

3 – Turning stance is needed in order to prevent us from having to put all our eggs in the same basket, meaning ‘Block or get hit’.

So when we think about it like that, a turning Tan/Punch is vital to get right!

When Ip Man was teaching turning punch, he felt it such an important technique that your training in this, would consist one year of Siu lim Tau, then a second year on Chum Kiu, and only then did he feel you ready to learn this move.

In 1969 however, he decided that perhaps this was a little too long and therefore reduced it, BUT still taking one year on Siu Lim Tau to develop the centreline, learn the turning punch, then take the second year of Chum Kiu training as a way of perfecting the technique.

Whenever I am checking a students technique, there are usually two main issues, striking at two targets or a misplaced Tan.

The video below is a segment of one of our old livestream classes where I addressed this issue, looking at where we strike and where the Tan, should and should not, be.