Training for NOTHING in Chi Sau 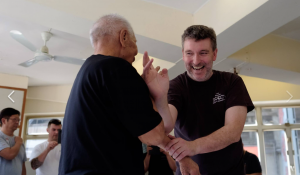 It is the easiest thing for a non Wing Chun person to watch someone playing Chi Sau and think,

“What the hell are you two doing?”

Well I know what we are not doing, fighting, so to me, when someone tries to comment that Chi Sau would not win you a fight, firstly this is like someone shouting at a banana because it is not an apple (I do hope you get that idea?), and secondly I would say that the person making such a comment, clearly does not know what Chi Sau is about.

We all know that Chi Sau is 100% NOT a fight, but it does have all the aspects of a fight (as explained in the video below) and is more a game of refinement rather than sparring.

What I mean by this is that when looking at my Sifu, Master Ip Chun, I have heard such stupid things as, ‘Anyone could beat him‘ and ‘What doesn’t the guy just whack him?‘ or, the most important and most misunderstood would be, ‘He’s got nothing’.

This my dear friends, this is the ultimate of what we are searching for, well in the case of this blog it is.

When you are talking about a 5’3″, 98 year old man, weighing less than 7st dripping wet, MOST people could pick him up and throw him!

BUT, if you want to roll, and discover the most finite detailing within his positions and energies, then to me you could not find a better Master

So, to the title of this blog:

Training for NOTHING in Chi Sau

This is of course, explained in the video below and is mainly looking at the understanding of balance within your game, I do hope you find this interesting and get something from it.