The Secret Of The Dummy 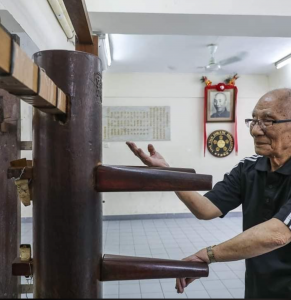 Why is there a mirror behind this Wooden Dummy?

The image above was been taken at the Ving Tsun Athletic Association (VTAA) in Hong Kong, Ip Man’s own school and the continuing ‘shared‘ training facility for many of his most Senior students, including Wong Shun Leung, Chu Shong Tin and of course Ip Ching and Ip Chun. 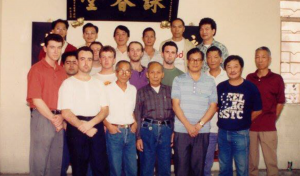 The wall behind us later became windows

The important thing to notice in that top image is the mirror behind the Wooden Dummy, which is there to check your positions, one key position being the Bong Sau and to make sure that when using this move, you DO NOT show your tricep.

At the bottom of this blog I will show a different idea as to the ‘Use of the angles’ in this Form, but for now I would like to focus on one singular point…

When you stand in front of the Dummy it is clear to see, that neither of the arms are actually aiming toward you.

Of course the lower arm IS pointing forward BUT when this is being used it is meant to represent a kick, not a punch, and therefore NOT an arm.

So what do I mean about the ‘Secret’ of the Dummy, well, the first thing we must realise is that when training on the Dummy,

So adaptions need to be made in order for this Form to make any sense, for instance, when you are stepping in to the Dummy, this is often representing that the Dummy (your opponent) is in fact stepping in to you, and so on.

So what about the Bong Sau, and where do we aim this?

If neither of the top arms (punches) are on target, then what am I blocking?

Do not be tempted to throw your arm all the way across the face of the Jong in order to have a wrist contact with the opposite arm (which arm will be described in the video below), when the Bong is used (in the middle of the arms) the contact on the Dummy will more likely be with the blade of your hand and not the wrist, because the ‘Secret’ is to know that, for the majority of the time, the attack is coming straight down the centre.

This is why on this particular Dummy, a fist is engraved in the centre of it, as a reminder of where your focus should be (supported by the mirrors to check your tricep is not exposed). 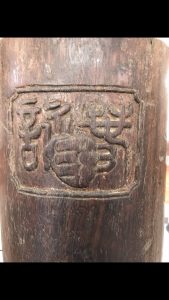 The centre engraving on the VTAA Jong

This Dummy is also wall mounted in such a way that it can be raised or lowered by adding or removing small wooden blocks, this is because when mounting your Jong to the wall, it should be at such a height that the upper arms are level with your chest (nipple height), which in turn requires a slight bend of the knees when playing the Form, resulting in an additional leg workout.