The Order Of Forms 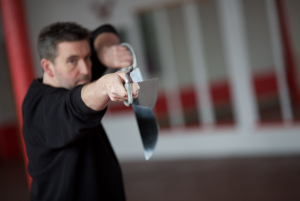 If you’re studying Wing Chun (and if you’re reading this blog then it’s probably fair to say you are) then we all know that traditionally Wing Chun has six Forms, three hand Forms and three not hand Forms.

I say traditionally because there are many instructors out there who seem to feel that we need more of them and therefore create their own additions such as kicking Forms, sandbag Forms, punching Forms and so on.

the secret is to try and take away, but still keep it pure”.

Now, playing devils advocate here for a moment, I am not saying that Ip Man was the only person to teach/learn Wing Chun, nor will I say that he was right, gospel, should never be questioned and is the all seeing eye of Wing Chun, to which no one should question anything he said, bla, bla, bla.

(Hopefully that should settle the keyboard warriors of the world)

Now I can continue with my intended direction.

Siu Lim Tau and Chum Kiu, are, as we all know, the first two Forms of the system, in fact, often referred to as your 1st and 2nd Forms (there’s a bit of a clue I guess), but now my friends, we hit a crossroads with regards to your 3rd Form, Biu Gee.

Although this is the third of your hand Forms it is not necessarily the third Form you should be learning.

This order of Siu Lim Tau, Chum Kiu, Biu Gee was often taught in smaller classes, usually where the venue was hired for the duration of the class and often because they simply did not have a wooden dummy to use.

Unfortunately though, something I discovered to be a huge extra factor (as I travelled giving seminars etc.) was that the dummy Form was also not being taught to students due to the teacher not knowing the Form in the first place!

And rather than be honest with the students, these ‘Instructors’ would hold back teaching it so as to not be found out.

This was even more so with Biu Gee, often being known as the secret Form.

“There are no secrets in Wing Chun, only time and practice”.

Let’s break down the Forms for a moment:

This develops the basics, hand positions, centerline theory, leg strengthening and let’s not forget of course, energy (to name just a few).

This is usually thought of as your fighting Form, working more on the attack and defence while turning, stepping and using kicks etc.

This Form is basically used in the recovery of centerline should it be lost, therefore bringing our mentality back to Siu Lim Tau.

BUT, how do you know if you’ve lost centre unless you have fully understood the system first?

Master Wong Shun Leung (Ip Mans first student and Bruce Lee’s teacher in class) once said to me that he doesn’t feel the need to train Biu Gee because if Siu Lim Tau and Chum Kiu are trained properly then centreline should never be lost.

In my opinion this was a little ‘tongue in cheek’ because mistakes (like the loss of centre) are rarely going to be your choice.

It would most likely be caused from an outside force such as a slippery floor, element of surprise, too much booze, and so on.

But who am I to even begin to question the great Master, Wong Sifu (R.I.P.), a very interesting thought though, and an idea I am very grateful to him for sharing.

Anyway, if we have trained our 1st and 2nd Forms it should now be time to start to use this while moving around an opponent, and this is where we find the Wooden Dummy.

A Form designed to teach you to move around your attacker, NOT purely for conditioning arms. If you are hitting the arms with force and those arms (in reality) disappear, there is a strong chance of you over committing.

The Knife Form, (these days anyway) is trained to be used as an extension of your arms, for instance, if your Tan Sau is slightly off line in hand techniques, then extending this through the knives will show the final position to be exaggeratedly off course.

As for the story of the pole Form, (six and a half point pole), this was a much later addition, after the passing of Yim Wing Chun and taught to her husband, Leung Bok Chow from an escaping pole master and therefore is considered a bit of interesting way of using the Wing Chun principles in a long range weapon.

So in conclusion, in my opinion the Forms should be studied in this order:

Although to be honest, after the first two Forms it doesn’t really matter that much.

I’d like to finish this blog with a thought,

When Sifu was asked:

“Which Form is the most important?”

“Which ever one you are training at that time”.