The Eight Kicks of The Wooden Dummy 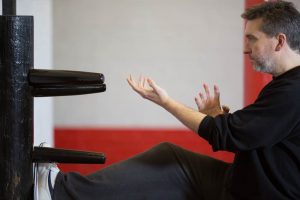 This is a question that pops up very often, causing confusion to all who are just starting out in their Wooden Dummy training.

Of course, there are many various and wonderful ways in which we can name our kicks, such as:

Whereas for me there are only two:

Now of course these kicks may be used Passive or Aggressive, either Snapping or Thrusting, it may be used to Stop someone and its path may be one of Lifting action, but let’s try to keep it simple, so I say again;

For me there are only two kicks:

So where do we get the eight kicks of the Dummy Form and first of all, where does that number come from?

In the Dummy Form it is said that there are 116 moves BUT as the number 8 is lucky in Chinese culture, many like to say there are;

Ok so that explains the number but where are the eight kicks?

Well, the number 8 does not refer to actual kicks but more toward footwork techniques and principles.

These eight kicks are found as so…

Kick No.2 – section 4, the front kick to the side of the knee

Kick No.3 – section 6, the stepping through front kick (changing leg)

Kick No.4 – section 7, the double kick (The high front kick counting as No.4)

Kick No.7 – section 8, the Pak and front kick to knee (together)

Kick No.8 – section 8, the double Lap and kick to the shin

So do not try to overcomplicate things, keep your Wing Chun simple.

the secret is to try to take thing away while still keeping it pure.”