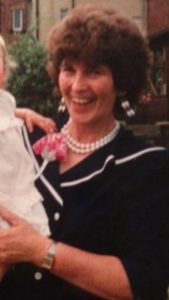 A couple of weeks ago I set off to Hong Kong with a group of students to visit my Sifu, Grandmaster Ip Chun, a man who at 95 years of age is still attending daily classes to oversee the development of his students through teaching and training.

Meanwhile, back in the UK, only hours before flying, I had been placed in charge of arranging the last rights to be delivered to my Mother, Mary Ward, who at the age of 87 was preparing for the end.

She had suffered for many years with various illnesses, the last of which being skin cancer.

Now some of you may be thinking, ‘What’s this got to do with Wing Chun?’

This being mentioned in a blog may be strange to some of you, and to me too if I am honest, but:

WHAT IS A BLOG?

I was told that a blog is a sharing of experiences, thoughts and of knowledge, and the only reason I wish to share such a personal matter is because I now wonder, what she would have been like had she studied Wing Chun?

I do not mean internal health wise or as in her fitness through advancing years but more I refer to the character of the lady.

She was such a proud lady who carried herself with dignity, not a tall or strong individual, but the way she held her chin up and shoulders back and with a smooth beauty to her actions, I wonder if she would have played Chi Sau in much the same manner.

At Friday lunchtime I was called by the care-home staff, saying that things were beginning to come to a close and that I should try to get to see my Mother while I can.

I gathered a few bits together and set off on the one hundred and fifty mile trip to Leeds, where the care-home is based, as is my school.

I stayed with her from 5.30pm Friday afternoon until 3.30am Tuesday morning, having to call for staff members, the district nurse or out-of-hours doctors whenever extra pain medication was needed or care assistance required.

It was at that time on Tuesday morning the decision was made to let her rest, leaving her the peace, dignity and privacy of being allowed to drift off in her own time.

For four days with no food, no liquids, her body shutting down, her heart just kept on beating the highest echelon of conservation of energy.

The more I look back, I remember the poise in which she carried herself, the ability to multitask (To keep balanced), her relaxation under stress while at the same time dealing with tasks in the most direct manner, it is no wonder that my martial path was to be one of Wing Chun.

It’s almost as if she was teaching me Wing Chun before we even knew what Wing Chun was!

And I do believe an element of that, when I introduce beginners to their first lesson I explain to them:

‘It’s my belief that you already know Wing Chun, but it’s now my job to pull that out, reshape it, and give it back as a fighting art’.

So to my Mother I say this:

‘The caring and love you gave to us in our early years, I hope we have given to you in your later years.’

Another twenty-three hours went by before her calling was to arrive, and it is now with a heavy heart that I share the news that my Mother finally passed away this morning at 2.30am.

I would like to thank you for all you have taught me and all the kindness you have shown, not only to your children but to all who met you.

I only hope to continue your teachings by trying to do the same to all I meet too.