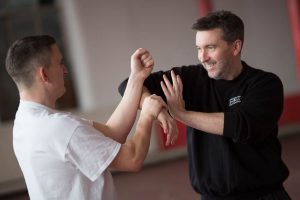 In the earliest stages of Chi Sau development, it is most common to have Lap Sau Ex following Dan Chi, an obvious step up through the technical requirements when you consider that we are now moving on to the use of both hands and, we start to incorporate footwork through use of the turning stance.

In order to get the perfect technique here, there are several things we must consider, such as aiming straight with the punch, and genuinely focussing on the intention of the punch (rather than just dropping a dead weighted back fist onto the Bong), not being lazy by simply resting your punch on the Bong and/or sticking to each other unnecessarily or overcommitting.

One of the first things to remember about Lap Sau Exercise is that is is not teaching you how to Lap Sau!

It is teaching you what to do if you are Lapped.

This becomes obvious when we consider that a Lap Sau technique generates its power from three elements:

The drop in stance

Using all three of these points together will either give you three times the power OR make it a third of the effort.

And how do we Lap in Lap Sau Exercise?

By doing the exact opposite!

We only turn with the Bong, not with the Lap, therefore exaggerating the idea that we are focussing of the defence, NOT the attack.

Master Ip Chun explains that there are five things we are training within this drill:

3 – That if you are lapped you will use a Bong

4 – That if you use Bong you will turn

5 – That if you turn, you will turn the correct way

In this beginner class, so far at least, the students had only been taught the actions of Lap Sau Exercise and were now being to introduce the turning stance.

Here I am explaining a solo drill I use (excellent for assisting the feet to be used correctly when partnered), and also explaining the need and method, in the use of the thumb when Lapping.

This video would be best viewed on a large screen and at full volume.