It’s All About The Elbow 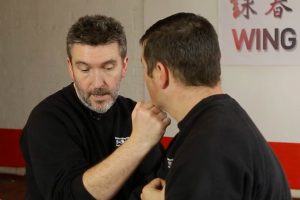 It’s All About The Elbow

This is also why Siu Lim Tau is SO important.

I have said many times that;

‘If you can perform a Tan Sau then you can train Wing Chun,

But I would go as far as to say that if you cannot perform a Tan Sau,

I say this because to me the Tan Sau IS Wing Chun, or at least the shape of the elbow is, because this triangular shape is the ‘Black & Decker‘ of martial arts, the elbow remains the same, it’s just got interchangeable heads.  (Other brands are available)

Wether it is a Tan, Punch, Pak, Jum, High Garn, Side Palm, Jeng and so on…  the elbow remains the same.

Only when it us pulled out of its shape and down toward the ground, do we sacrifice one elbow position, by rotating through the wrist, for another, the Bong Sau.

For more than twenty years I trained 10,000 punches every day because of this idea, via the changing of one arm to the other but always being true to the driving force of the elbow.

Punches are an easy way of summing up the ‘Actions’ of Wing Chun.

One hand goes forward and one comes backward, is this not the same for all techniques?

A hand may go forward as a strike or as a block, while the hand coming back may be used as a Lap, Jut or retraction to a guard (for example).

This principle is the same for Lap/punch – Pak/punch, attacking, guarding, pinning etc.

This idea should also be used when training in Chi Sau, and even how to defend centreline with a single arm.

These videos describe something I refer to as…