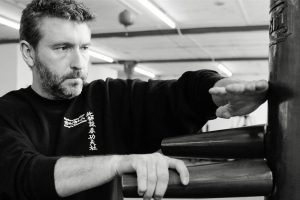 Being more tactile when playing

At last nights class I decided we should play Mo Jong (meaning ‘No Dummy’), which is basically playing the Wooden Dummy Form, without actually having a dummy.

Not only would we play the Form and I give corrections along the way, but also look at applications for each section, mainly using street applications and using a more aggressive attitude.

Oh and by the way…

The idea of Mo Jong was first presented to me (maybe 20 years ago?) by Master, Ip Jing, when he and Master Chu Shong Tin visited my school in the UK.

After the time together at my school was through, they asked me to accompany them to a seminar they were giving elsewhere, with the topic of this seminar being the Wooden Dummy Form, the issue however was that there was no Dummy available at the venue, it was then that Master Ip Jing he asked if I would assist him by playing Form as a demonstration, purely as a pattern.

At the time this was something I had never done before!

I must admit to feeling a little nervous at the time and made sure that I would drill this idea ever since so as to never feel uncomfortable with this idea again.

Now back to the blog:

When training the Form on a normal Dummy, there are many factors we must consider, such as training the positioning of the arms and not just trying to condition them, or feeling where the moves are coming from and going to, rather that trusting only what you can see, and other vital elements such as the footwork and learning to move around your opponent in a tight space.

In fact the more varying methods we use while playing the Form, the deeper an understanding of it we will develop.

Last night my intention was to concentrate on how the hands lead where the rest of the body follows.

A simple idea behind this is that your feet will never be as fast as your hands, therefore, taking a casual step in the Form and deciding to engage the hands at a later stage, is simply not practical or realistic, so do try to allow the hand to react first, even if this is only a gesture.

The video below was taken quite some time ago, and at a different class, but there explanation is still the same.

I do hope this makes sense and helps you to find yet another way of playing this wonderful Form.