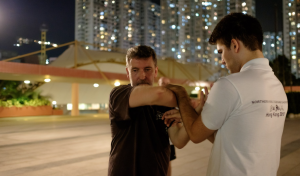 What do I keep balanced?

Thirty years ago, I had a series of principles I used to teach to my students, a kind of check list to remember, things to balance when playing Chi Sau, these elements were:

Now I would like to address these in reverse order if I may, starting with:

An idea I had personally taken onboard very early in my training, with the focus being on sensitivity, almost trying to allow myself to fall through these gaps rather than constantly trying to create or force them, using methods like simply trying to smash through (especially since this was not an option for me anyway!).

It was not until my Hong Kong years that I heard Master Ip Chun use the phrase,

The very same principle I had already been using for so many years.

Moving onto footwork then and another approved method I used.

The mantra I would try to instil on my students here, would be along the idea that:

‘If ever there was a problem with your arms, let your feet sort it out’

To remember that you do have a choice, and that is…

Again, I return to the wise words of my Sifu, and how he would describe people’s approach to Chi Sau.

‘Too many people stand too close to what Chi Sau, constantly staring at what the hands are doing,

Master Ip Chun has a wonderful way of watching people play Chi Sau which he shared with me at the VTAA in Hong Kong, (something that many people misinterpret as him not being interested) and that is that he watches the floor, only when he sees good footwork would he want to raise his view to observe the hands.

I remember in the early nineties, when he told me that a good practitioner of Chi Sau should hardly move and that the inexperienced would be here there and everywhere.

Well, after discovering this new information, I thought it would be a good idea to push and pull my partners all over the place while keeping my stance fixed, while all the time in my head I’m shouting,

“Hey Sifu, look how good my feet are compared to his”

Although I must admit, all joking aside it really did make me better understand how to control myself footwork while dominating everyone else’s, thinking about Sifu’s unusual methods I’m starting to think he knew I’d do that all along???

At the time of learning this in Hong Kong, I was told that there wasn’t a word (as such) for relax, simply, tension, or to withdraw tension, later I discovered this to be not quite correct, but the principle behind Sung Lik still remains the same.

Now we get on to the big one, Gung Lik, as to the translation of this, well let’s break this down a little, as it does not simply mean power or energy, there is more to it than that.

When we refer to Kung Fu (pronounce ‘Gung’ Fu in Chinese), this does not mean Martial Arts but rather, Hard Work, and, Skill

When we refer to hard work and skill, this does not that this particular skill is hard work, but more the case that, a lot of hard work has previously gone in to achieving this level of skill, such as that of a painter or carpenter.

Thinking in this way, we could say that we are trying to achieve a level of Gung Fu in our Wing Chun, hence, Wing Chun Gung Fu.

Therefore, if someone refers to you having excellent, Gung Lik, this is probably the best compliment you will ever get, as it refers to the Gung Lik skill you have acquired over a very long time, basically your ability to use energy properly.

Going back thirty years for a moment, when I first refer to asking a beginner to try to discover Gung Lik as part of this series of principles, to work into your Chi Sau, I am only asking them to just think of this as the use of energy in general, the reason being that ultimately, we will try to achieve Gung Lik one day, but before we can start trying to better understand and control energy, we need to know what energy is.

This is just something I wanted to share with you, and I do hope you get something from it.