Don’t Put The Bunting Out Too Soon 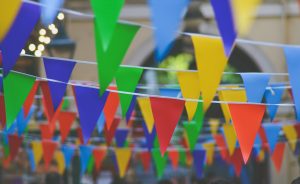 One of the most common problems I see with people playing Chi Sau is that as soon they get a technique on their partner, they stop!

Or, as soon as they block an attack, they then relax!

Now I’m not suggesting that you go for it, full on, 100%, all the time, but simply that you do not let your guard down the moment you have the slightest touch of success.

Western Boxing, a very noble sport and a great fighting skill, but even there you could be sarcastic and say ‘Well at least they get to sit down and have a drink every three minutes’, and the same is to be said for sparring.

But what is Chi Sau?

We know that of course, but what we must not lose sight of is the fact that although this game may not be a fight, it carries all the important characteristics of one.

Bearing this in mind, in no fight is there ever going to be a strike/block and then pause to congratulate each other on a successful exchange, so do not do it in Chi Sau, at least not mentally anyway.

In a real fight, from the moment it starts it will continue until it is over, and as a Wing Chun person you probably do not have the fitness level for a lengthy sparring session, so you need to get in first, fast and hard, but also have the ability to keep going until you have reached your objective.

And there’s no point getting frustrated if your partner hits you after you’ve hit them, possibly having the thought, ‘Are you not acknowledging the fact that YOU’RE HIT?’ and possibly thinking that this would have changed the dynamics of the situation and that your partner may not even be standing there to use such a counter attack?

In many ways all valid points, BUT, deal with it.

It would be more than foolish to think that even if you landed a great shot in the fight, that the guy is not still going to be swinging.

Therefore, rather than complain about this in Chi Sau, accept it as a massive part of your development.

Do not stop hitting and;

Do not take your eye off the ball.