Do Not Sell Yourself Short 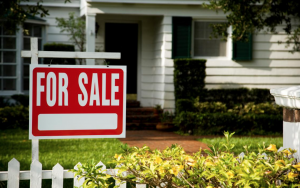 At the start of this year we put our house on the market and so far have had five viewings arranged, so, so far so good.

Getting ready for a viewing, sees my wife and I scampering around the house, making sure that everything is tidied away, with each thing in its proper place, cushions plumped, work tops clean and not a spec of dust anywhere, leaving the place looking like it’s ready for a photo shoot for ‘House and Home‘ magazine, but after the viewers have left, you get to enjoy your home as it should be.

Now I am not suggesting that we live like pigs, or that our house is usually in a mess, but it is fair to say that it does not usually look THAT good.

So the question is, when someone is selling their house and getting it pristine who are you doing this for?

Yes, yes, yes, the potential buyers of course, but the point is, why are you not enjoying this level of comfort every day?

This mentality can be very similar to those preparing for a competition, a fight, or perhaps a grading or assessment, in that their training is geared up for one main goal, but what happens when that goal is reached and the training regime is over, or, what if you have no goal in the first place?

I have touched on this idea in previous posts but this is a topic worth revisiting from time to time.

As the great philosophers Fun Boy Three and Bananarama once said back in 1982,

“It ain’t what you do, it’s the way that you do it, and that’s what gets results”. 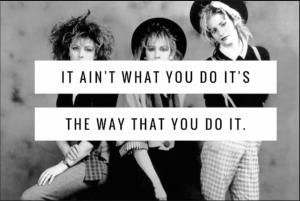 When Mohammad Ali was asked what he would be if he wasn’t the greatest boxer in the world, he said:

“It wouldn’t matter what I did, I’d still be the greatest.

If I was a garbage man I’d be the greatest garbage collector of all time”.

And it is exactly this attitude we must all try to acquire.

I asked my students:

“I want you to play your Forms for me as perfectly as you possibly can,

Now show me your kicks, your stepping, your turning punches and your drills,

again as perfectly as you can”.

“Imagine today is your grading!”

“Imagine Jackie Chan had been driving by, suddenly got a flat tire and called in for assistance,

but then decided to stay a while and watch a class.

“Imagine I wanted to surprise you all and did not tell you that my Sifu was flying in today!

May I introduce, my Sifu, Grandmaster Ip Chun!

Well, unfortunately Master Ip Chun has not made a surprise visit, Jackie Chan does not have a flat tyre, and today is not your grading, BUT, if you were willing to improve your training intensity for them, then do it for yourself.

Johnny Wilkinson the England rugby player said that in order to get the best from himself, he always imagines that every training session he does, is being filmed for a TV documentary (and therefore always wants to look good for the camera).

It’s ok to have an occasional off day, and training something is still positive because every little snippet of training does help.

But if you can train, train properly.

Because if the shit does hit the fan, you will not be in a class surrounded by your Kung Fu family, supported and watched by your Sifu, chaperoned by Ip Chun & Jackie Chan, it will just be you, and you alone.

The street is not a classroom or a grading, Jet Li and Jackie Chan are not watching you, and you do not have the wisdom of the Grandmaster advising you on what is the best course of action.

SO DO NOT DO IT FOR THEM,

Do it for you,

Because when it is needed, it’s just you and your opponent.

So I ask again,

Who are you doing this for?

Imagine if you could see into a crystal ball and knew you were going to have a fight in exactly two weeks time, with no chance of avoidance, knowing this IS going to happen, how hard would you train then?

So do not wait until then, train today

Now go make every session you train from now on be better than the last.

A Form done once properly is always  better than ten half-heartedly.