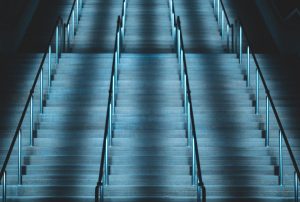 One step at a time

On Saturday 16th May I wrote a blog regarding your Forms and which one is the most important, with the answer being,

‘Whichever one you are working on at that moment’

Something I found very apt the next day while doing some DIY work at home.

I’ve always been very good at DIY, whenever my wife asks me to do something I say, “Do it yourself!”

Joking aside, in our garden we have a tree house, it’s an amazing thing for the children, which if I’m honest, was one of the deciding factors in our decision to buy the property in the first place, the only down side of the thing was the door being covered in shiny CD’s.

Now I do understand that this is done so as to scare away birds etc. but I have to admit it did look somewhat out of place.

My wife asked me (well instructed me), to cover the door with tree bark so we didn’t have to look at what resembled a disco in the trees.

So last weekend while trying to be the dutiful husband, I decided to tackle this job while she was out shopping, then sat back to admire my work, unfortunately she did not admire the work as much as I had, and on reflection (if you’ll excuse the pun) she was right, as I had simply nailed the stuff over the CD’s without taking them off first.

I had also screwed the bark on in short horizontal strips making it look a little like a rail track running up through the trees.

I knew she was right so this weekend I decided to make things right and do the job properly.

Having fallen for the very ‘Buy cheap pay twice’ mentality I have mentioned before when it comes to rushing your training and only having to then go back later to correct mistakes.

I stripped off the bark and set to work chiseling off the CD’s,

The amount of glue used to stick these things on was ridiculous with nearly every one I tackled, shattering into a hundred pieces taking an age to finally remove.

Although I started the job on Saturday I was still at it on Sunday and at one point thought,

‘How many have I still got to do?’

Then the penny dropped and I realized, I knew exactly how many I had to do…

And when that one was completed…

And so it went, staying in the moment, not getting worked up or stressed but simply dealing with the job in hand, and eventually I got there.

All CD’s off I then sanded the door, cleaned it down and painted it midnight blue before screwing fresh bark (this time in long vertical strips) back on, and I must admit it looks great. 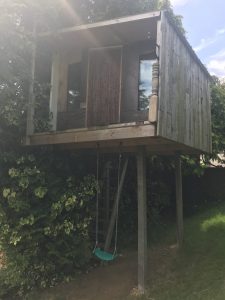 So no matter what you are doing, do it right, not only will it make you feel awesome but by not doing it right in the first place only means that you’ll have to go back to it again later anyway.

On the 25th March 2020 I wrote a blog called, ‘The Click Method’ where I refer to not rushing ahead in your Forms, and that is exactly what’s going on here, learning to stay in the moment and not get overanxious about taking on such a daunting task (what may be daunting to you I mean).

This is where our Wing Chun can help us in our day to day life, it is the easiest thing to rush ahead, losing sight of the journey in order to purely get to the destination, an all too often occurrence in Chi Sau with people playing the, ‘Fastest draw in the West’ game.

Just like playing tennis, where the rally itself is where the fun is at, not just scoring the point.

During lockdown, those of you with children may be feeling the stress, where getting them ready for bed takes an age and getting them dressed on the morning seems an impossible task, well use this mentality here too.

Instead of trying to rush ahead and get to the next bit, here’s a great tip,

Try making getting ready for bed / tucking them in / having breakfast, whatever it is, try making it last

Five minutes longer than you need.

The result will be complete relaxation on both sides, no on battling to ‘win’ the argument, no stress and a much more enjoyable experience for everyone.

Therefore, before you start a task, any task, whether big or small, in your Wing Chun training or in life, ask yourself how you are going to approach this job, this Form, this training regime or campaign, and ask yourself,

“Is that the BEST way it could be done?”

Or are you possibly about to shortchange yourself, after all, if you’re doing it for YOU, don’t you deserve the best don’t you?