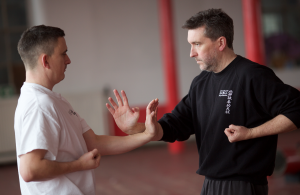 Not completely, but as a view to getting better use of the basics

In this blog I found myself (for a moment) not knowing where to start, and then it hit me, obviously, at the beginning, and the interesting thing about this is that, that is also where we will finish, at the beginning.

I admire anyone wants to progress, but not if it affects what you are doing now.

Over the last thirty years I have given a crazy amount of beginner courses, and in everyone, I have urged the students to practice what they learn on day one, even though they feel as though they have, ‘Got it down’ or ‘Nailed that one’ and ‘Ready for the next bit’ etc.

It is at this point I remind them that what we will be doing in lesson two, is going to be AS WELL AS, not instead of, and the same goes for lessons three, four and so on.

So do not waste the opportunity to drill the early stuff while you can, or you may wish you had later through the course.

And this goes for all of your training.

The confusion here is that because something is learned on day one of a beginner course, a student can think it has no value in their later development, well I’m sorry but within the first lesson of my beginner courses we focus on Tan Sau and punches!

Are you telling me that these will be of no value later?

Now to put this into perspective for a moment, in Shotokan Karate there are eighteen hand-based Kata up to Shodan (Black belt) level alone.

In Wing Chun, having only three hand-based Forms means is that for every ONE Form we train, they would have to train six, so by that rational we have the opportunity to get six times deeper understanding of each of our Forms, but do people do it?

Many people will purchase a Wooden Dummy and then never visit Siu Lim Tau again, and yet this is where the deepest understanding can be found!

Moving backwards in your training is not to be seen as a bad thing, in fact it is essential if you are to progress in the longer term.

Look at a car for instance, you want to improve it, to make it faster, get better brakes, a better grip of the road etcetera, so you take it to the garage and what’s the first thing too happen?

The thing gets stripped back to nothing, wheels off, engine out (maybe), exhaust off and so on.

So taking two steps back in order to then make three steps forward IS advancing.

Think of an airplane on a runway, in order to get the best chance of taking off, it will first move as far back as possible.

I would like to think I am a tidy person… but when I leave my bedroom on a morning I will collect everything I need to take downstairs (or so I thought I did), because it is not until later, when I go back into that room that I realize I did not collect the clothes on the floor for the washing basket or open the curtains fully.

Later again I may go back into that room only to realise that I also forgot to make the bed!

So my point is that by going back, time after time, I realize that there where things I missed the first time around, things I should have done better, things that if not improved WILL prevent me moving forwards and even create a ceiling level to what is achievable.

When you think about it there is not really that much in Wing Chun, so what happens when we do learn all of the Forms, know all the positions and feel quite good at our Chi Sau and sparring? 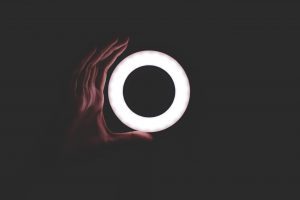 We start the cycle again.

And that’s exactly what it is, a never ending cycle, going round and around, and with each time not only gaining that deeper understanding we are all searching for, but realising how much we simply did not know, and how much we had skipped the previous time around, due to our eagerness to move forward.

Take your time and keep revisiting what you did as a beginner.

Basics are important but at some point we do need to relax them in order to make them suit OUR needs, BUT we must never screw up and throw away the blueprints.

These basics are your default settings, so just in case you relax your basics TOO MUCH there is always a path to guide you back to that initial understanding.

Neglecting basics completely, because of your supposed advancement will only destroy that path for you personally, and be a real issue should you wish to later teach others, as those blueprints will now be destroyed too. 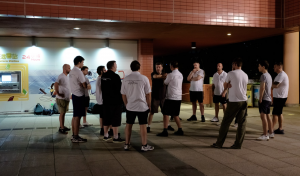 Why should you not teach one day?

What we learn today, we pass on tomorrow