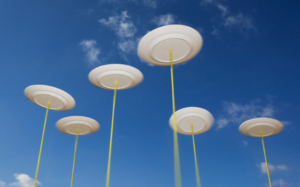 With so many things to think about when you’re starting out in Chi Sau, such as stance & footwork, hand positions, keeping relaxed, thinking forward, not overcommitting and so on and so on, it sometimes feels like you’re spinning plates, trying to keep twenty spinning all at the same time.

The strange thing is that when you allow yourself to be balanced, the Chi Sau actually gets easier, because you stop focusing on any one singular point.

Outside of Chi Sau, hand positions can be practiced in Forms, and foot-work can be digested through drills, but for one simple balance tip while actually playing Chi Sau, try not to think of balancing your arms by working as 50/50 but instead think of each arms working each at 100%, completely independently and on its own merit.

Whatever is going on with one side should not have a negative affect on the other, but this does happen.

Applying pressure to the one arm will often draw attention away from the other, creating an angle for your left side to strike may in turn be providing a gap that your right will need to defend.

So in order to be balanced,

Don’t share your skills between two arms, separate them.