A Different Approach To Jong Training 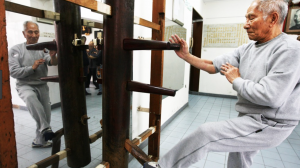 Do Not Be Blinkered (or rude)

There are two things I wish to address in this blog, one good (hopefully), and one not so good (unfortunately).

I would like to refer to a video I released some time ago on YouTube describing, one possible train of thought to be used when training section 4 of the Wooden Dummy Form, something I hoped would be of help to many students, and I am pleased to say it was.

On occasion however, some people do not see things in a positive light and wish to make comment.

Of course I do not mind this as everyone is allowed to have an opinion, however it saddens me sometimes as to how, some people choose to share their opinions, when this is rude and/or narrow-minded, and it is this which I refer to as the ‘not so good‘ element of this blog.

I would like to show you the comment, then the video, and then my reply, a reply I chose to send politely and with explanation (as requested by the individual LOL) which I hope to be the ‘good‘ part of this blog.

I should also mention that throughout this whole videoed explanation of section 4, Grandmaster Ip Chun was sat only a matter of feet away, at his desk watching the entire explanation, before, during, and after, this was recorded.

I am not making this blog to try to put anyone down or to make any individuals look bad (this is why no names are being used) but instead I wish to share this because in such difficult times I believe it is important that we all try to work together, sharing ideas and helping each other to grow in our knowledge rather than to try to divide opinions and schools of thought.

“Sifu go to 1min 31 seconds and explain your mistake.

Ok I will do it for you.

You totally collapsed your structure going from the bong to the tan.

You should also be facing the dummy not pushing sideways but in over.

I can’t believe with all your experience you made these mistakes.”

I think you misunderstand, the Tan is only coming from the Bong in the Form pattern, the application I am explaining here is in gaining a contact, hence why I said ‘Your feet will never move as fast as your hands’.
What I am explaining there is that you should not move, and then get the contact (soon to become a Tan) but get the contact ‘almost’ before you move (as you’d have little choice), and the contact I refer to is what eventually forms into a Tan.
The names of the hand positions/blocks/techniques etc. are merely descriptions of what has just happened, and usually we do get into a position to do the technique but instead, do the technique from the position we are already in.
Just because the Form ‘pattern’ dictates a story board of shapes, you should not be so blinkered by this that it prevents you from learning a different viewpoint.
Forms should be strict but applications must be open to interpretation.

Although that was where my initial reply ended, I would like to add just a little more by replying to the part where it was mentioned:

You should also be facing the dummy not pushing sideways but in over.

His wording, NOT mine.

Anyway, this is not completely correct, although there is some truth in what he is suggesting.

The reason for this is, we are showing that by this stage of your Dummy training you should know where the arms and leg are, without having to look for them.

In my defence, during this video I am teaching a student, NOT performing or demonstrating, hence my relaxed visual focus, also I might add, I do believe that in the original description of this video it is mentioned that this was not initially intended for public viewing but simply recorded for the benefit of the student I was teaching at the time.

This blog is not intended as any kind of a rant, nor to speak ill of anyone (as I have nothing bad to say to anyone), I simply wished to answer a question publicly and to re-share this video with the hope that it may now be viewed in a different light, should it have been misunderstood at the first time of watching.

Thank you for reading and I do hope you enjoy the clip.

Best wishes everyone and the best of health to you all too.