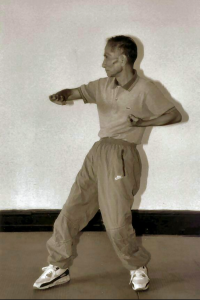 Wether you are in a Chuen Mar (turning stance) or using Biu Mar (arrow stepping), the hips will always be aimed at a forty-five degree angle, with the difference in stance being defined by the focus of the head.

The feet positioning however, may differ from one person to the next.

Don’t you just love how Wing Chun caters to the individual!

This is due to different factors, such as comfort of the front foot, or, variations in the individuals’ curvature of the calf muscles which will define the back foot angle (but we’ll leave the back foot for the next blog).

When we take time to analyse the turn of the stance, attention is most commonly drawn to the hips, or the direction and bend of the back leg, whereas I find little mention given to the from foot and what it is doing.

This is something I was explaining at a recent beginner course and would like to share with you.

In this beginner class we had only just covered Lap Sau Exercise and had discussed a little of the turning stance (not quite in any detail as yet), with tonights’ session looking at Pak Sau’s and in particular, the Biu Mar.

Here I am explaining the difference between Biu Mar and Cheun Mar and the most important factors, especially within the front foot of Biu Mar.

Please look out for the next blog where I look at the strengths and weaknesses of the back foot position.  🙂

This video would be best viewed on a larger screen and with full volume.

I hope you find something of interest.