Why ‘Do’ People Swing Their Arms? 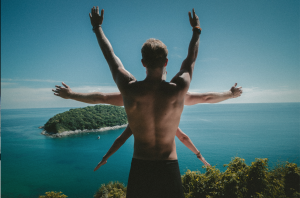 In a fight, is it really by choice?

If you’ve ever seen a street fight, either in person or on your computer screen, you may have noticed the swinging of arms when punching each other?

Now there is every chance that these people have had zero training in any martial arts or in fact any self defense whatsoever, but there is another reason for this too.

This is what happens when faced with danger, your brain responds by telling the adrenal glands (located at the top of the kidneys) to release adrenaline as a steroid to inflate the necessary muscles in order to be able to ‘Fight or Flight’.

The adrenal glands are absolutely vital to your wellbeing.

We each have two of them, and they play a hugely important role in producing the hormones that we need, particularly during times of stress.

Therefore the biceps and quadriceps become swollen, as blood quickly moves to these areas by the increased heart rate (your body’s internal pump of course).

This next piece is taken from Adrenalin Fatigue Solution, please pay particular attention to the part on the Medulla:

A simple way to understand the structure of the adrenal glands is to compare them to a fruit like an avocado.

There are three distinct layers that you need to know, and here is a brief description of each one.  Further down the page I will also go into detail on the functions that each layer performs.

What Does The Cortex Do?

The cortex and the medulla have very separate roles within the adrenal glands, although there is some interaction between them.

There are three roles that the cortex typically performs.

What Does The Medulla Do?

The medulla might only form 20% of the adrenal gland, but it is just as important as the larger cortex.  Whereas the cortex is more concerned about regulating different levels in our bodies and keeping our bodies functioning efficiently, the medulla is all about managing our response to stress.

Also known as neurotransmitters, these stress hormones generate the primitive stress response that helps to keep us alive in moments of trauma or danger.

When under stress, our brains send a signal to the adrenal glands which react instantly by releasing these stress hormones.

Among other things, they slow down our digestion, increase our awareness  and divert blood flow to important areas like our brain and muscles.

My thanks to AFS for allowing us to use that piece.

At the start of this blog I mentioned the heart rate, this will help to better understand the swinging arms.

Now a basic resting heart rate may be around 86bpm (beats per minute), which would give you perfect dexterity in your fingers.

In this state there would be no problem for you to write a letter, sign your name or even thread a needle.

In a fight situation however your heart rate can shoot up to 150bpm as blood is pumped to where it is expected to be needed, and away from where it is not (your fingers).

Asking you to hand write that letter now may become somewhat awkward and the same to be said for your signature, oh and as for the needle, forget it.

If someone should smash a glass or pull a weapon, your heart rate could then get as high as 220bpm!

All dexterity now has gone, and all attention moved on to the bigger muscle groups.

This is a prime reason why we play our first form Siu Lim Tau, to teach us to relax, to focus and to be direct.

Having the ability to control this even just a little, it will give you the greater advantage in this situation, especially when this relaxation and focus is partnered with straight line attacks.