Who You Calling Chicken? 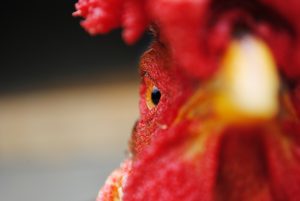 You may not know this but to many people throughout the world, the chicken is considered the toughest animal on the planet.

Let’s look at the evidence:

You can chop its head off and it will still run around.

You can cut off its feet, gut it, pluck it and freeze it.

Supermarkets still feel the need to tie its legs together with an elastic band, just so it doesn’t kick its way out of the oven!

Then why is it kept behind bars then! 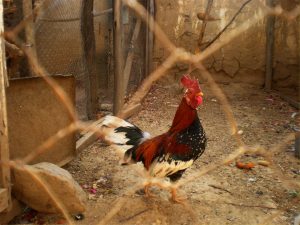 Okay, there’s a strong chance that none of that is true.

However, joking aside, I was training my Siu Lim Tau in a barn one day and noticed a chicken resting on a thin wire which ran along the top of a fence (the wire not the chicken), when the chicken let out a big stretch, raising one leg forcing itself as long as possible from claw to beak.

All while still balancing on this thin wire.

Now this seemed to take no effort at all made me think for a moment between the habits of animals and their connection with Kung Fu.

We all know the story of the Snake and Crane connected with Wing Chun, and you’ve probably also heard of the five animals connected with most Chinese Kung Fu:

Snake, Crane, Tiger, Leopard and Dragon (Sure I heard something about a Panda once too?)

We know of Praying Mantis and Monkey fist, then there’s Eagle claw, Horse stance even Ostrich, Bear and Duck (I kid you not!).

Ever tried taking your dog for a walk and it not want to go?

The dog is using the same resistance a goat would use, and for the same reason, so as not to break its breastplate.

The next chance you get to watch animals and the way they act (hopefully just in a play fight), take note of their movements and let that idea absorb into your training too.

It’s nice to remember our roots and to show appreciation for those who tirelessly studied these art forms, over years and years, in order to create the many beautiful styles we can so easily take for granted today.