The Story Of The Jong 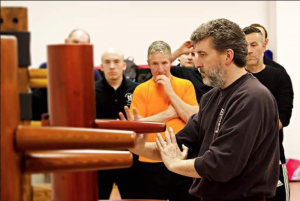 As Wing Chun practitioners we are all too familiar with the Wooden Dummy, if we have not yet learned the Form/pattern or drills etc., we at least know what one looks like (and if not from your school, from the movies).

Although we know the Wooden Dummy and what it is used for, but it is surprising though, how many people do not know where or how, the Dummy we all know and love, came about.

Not those ones, the ones stuck in the ground you see Shaolin monks standing on and varying in height.

Anyway, traditionally these were made longer than you may think, with around a third again of the body length being buried in the ground.

These are known as Dai Jong’s (Buried Dummies)

The following snippet is from;

Most of these dummies were of a type now called Dai Jong (Ground Dummies, also sometimes referred to as “buried” or “dead” dummies).

They were constructed from a log or tree trunk that was anywhere from eight to ten feet long.

Generally speaking the lower three and half feet would be worked into a thick square and buried in a stone or cement lined pit in the ground.

The still round main-body of the dummy would sit about three inches above the ground.

This was enough room to allow shredded rattan strips to be slipped into the spaces between the square base of the dummy and the side of the pit.

Packing the area in this way supported the central pole in an upright position, but it also allowed for a little give and spring when the dummy was struck or pushed.

Occasionally I see accounts stating that small rocks are gravel were used to line the hole.

I am not sure how widespread that practice was.

It certainly could have been done, and it would have provided a much firmer body.

Nevertheless, the resulting dummy would not have had much movement.

Unfortunately we don’t have a lot of examples of really old dummies.

After all, these objects were made of wood and when planted in the ground they would eventually rot.

This must have been an issue in a climate as humid and wet as southern China.

My thanks to ‘Kung Fu Tea’

If you wish to read their full (and well written article), just follow the link below:

It was not until Ip Man settled in Hong Kong that this Dai Jong became a problem, in short, should he have his traditional Wooden Dummy at home with him, then all well and good for the family Ip, but this would not be quite so good for the family living in the flat beneath him!

I’m sure you can guess why.

And so, various students set about trying to discover a solution to this problem.

Although there are several people who contributed to the design we are all familiar with today, the most well known contributor was that from Koo Sang, a student of Ip Man, who was fundamental in the final idea of having a Dummy, wall mounted.

This particular Dummy with its cross section supports meant that when hit, it would bounce back, and this ‘responsive’ action then developed into being known as a ‘Live Dummy’.

As opposed the Dead Dummy, which did not respond after being hit, and, may I remind you, was buried in the ground.

I had the pleasure of meeting Koo Sang in Hong Kong between 1991 and 1993, during this time he made a pair of knives for me (as used on the WingChun.Online site) which I still use today.

This was also very good timing for me as he retired in 1995. 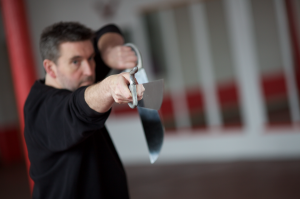 Sadly, Koo Sang passed away around 2004, but his legacy lives on today, in tens of thousands of schools around the world, who display and train daily, on a Wooden Dummy designed by this wonderful man.

We thank you Sir.