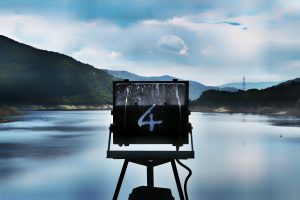 Not liked in Hong Kong

What some people may not know is that equally, the number 4 is a bad number in Chinese culture and one to stay away from.

The reason for this is because of how it sounds.

The number ‘Four’ in Cantonese is pronounced ‘Say’, but this is also VERY similar sounding to the word used for ‘Death’.

In this short blog however I would like to give you something positive to attach to this number, and it is in regard to your forms.

I often tell my students that every form should be trained on four levels, meaning that for each and every move you should know…

To explain this let’s look at something simple and early in your development, the very first movements for instance in the second section of Siu Lim Tau.

We should know that the left hand, first needs to turn so the palm faces downward, then slowly move vertically down until the last few inches, at which point we full extend the arm (not locking), while applying explosive energy at the very end of the technique

We should know that this move is called, Gum Sau

We should know that this translates as, ‘Pinning Hand’

And we should know its application.

Now here’s the extra part, even the tricky bit perhaps?

If you can do all of these for each and every move, then well done, but stay with number four for a moment, because if you do have AN application, just one and only one, get another one, and another, and another.

THIS is how you will expand out knowledge, but this is not and opportunity to just pull any old crock out of the bag but to find tangible, genuine and realistic applications.

A fun way of discovering new applications is by unearthing them through accident, and the more forms you know the easier this will work for you.

When sparring, allow yourself to get into trouble, let the crap hit the fan, then do whatever you need to do to get out of that situation.

IF you then find that something works, but you’re not 100% sure what it was, try to find something similar within your forms, then, Hey Presto, you’ve just discovered a new application for that technique.

It’s great fun and a great way of expanding your knowledge for application.

Try it, you’ll be pleasantly surprised.