The Evolution Of Wing Chun 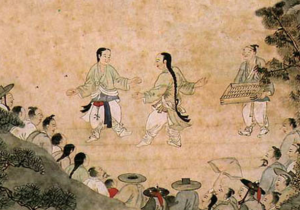 The style of Wing Chun is said to have been invented anything up to 300 years ago from the Siu Lam temple (during the Qing dynasty).

The Siu Lam temple was not only used for its religious purposes but also for hiding anti Qing revolutionaries (criminals) from the military.

Because of this and also due to a fear of the monks fighting skills, the Manchurians decided to react by using insiders to burn down the temple and kill all inside.

‘The venerable five’, one of these was the Budist nun Ng Mui, a Siu Lam boxer.

e, and decided to bring this together with her own previous studies, to eventually create, a new, unnamed art.

As time moves on we see change after change, not just to Wing Chun but to the Martial Arts in general.

A lot of the time this can good, but as Ip Man said:

“Anyone can add on to a style, the secret is to try and take away, but still keep it pure”

But not all changes are good, and changes should not be made just for the sake of making changes.

I remember my Sifu (Ip Chun) once saying to me:

“It is important for Wing Chun to still evolve, if not, it would be like never inventing the wheel”

And this is true, things do move on, as I’ve said before, just because the Model-T Ford was the first mas produced car doesn’t mean to say that it’s the best today.

No doubt it’s got charm and character but I would want to put it up against a Ferrari!

Changes I have made have been within myself, and my teaching, to be able to simplify and get the message across with more clarity.

I used to tell my students:

People talk of blending arts, mixing them, maybe this works and maybe it doesn’t, but as always the most important thing is that it works for you.

For reasons of personality, ability and individuality, I choose to not recommend any other or additional arts as a general rule.

When it comes to blending arts, some are good and some are just bad.

Try to think of this as mixing foods, ice cream and soup?

Just because both are liquids, doesn’t make them the same, or mean that they should go together.

What next, a coffee bean that’s already been eaten a passed out the other end?

Oh no wait, they actually did that.

People do occasionally get away with serving up some complete twaddle, using the saying, ‘It’s a delicacy’

Be sensible, make your own mind up, of course be adventurous and be open to new ideas,

and if its palatable, great, if not leave it.