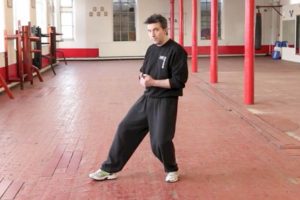 As a beginner of Wing Chun it is most likely that the first thing you were taught was the bow, followed by your basic stance;

Now there are many points to know regarding Yee Gee Kim Yuen Mar, here are just a few..

Firstly, after the beginner’s laughter has stopped, this is sometimes followed by (if not the actual question, definitely the thought of):

‘What the hell is that?’

Now we obviously know this as our basic stance, but how much do we actually know, or, are we just doing what we are told, blindly, and without question?

We may initially explain that Yee Gee Kim Yuen Mar is just a training stance and that it is unlikely to be used directly (as it looks anyway) in a street fight, unless you are attacked on the toilet that is!

But the fact is we do use this stance in reality, and a lot more than you may think.

For example, if I use a turning stance (Cheun Mar), whether blocking or striking, and then look down at my back foot, I would notice that it is slightly turned in, therefore making half of the Yee Gee Kim Yuen Mar.

If I turn my attention away from the Cheun Mar direction, and focus in a Biu Mar (Arrow stepping) direction, I notice that my front foot is also half of Yee Gee Kim Yuen Mar.

So you see, in reality we do use this stance in a real life situation, just not with both feet turned in, at the same direction, at the same time.

We may also explain that the triangulation within Yee Gee Kim Yuen Mar, means that, should we distract our minds from the legs (I refer to Siu Lim Tau of course), then we will only sink deeper into this stance, but will not fall over.

Instead we will simply have the leg workout of our lives, only realising this the moment we decide to come out of it!

In fact any Martial Art, which uses the idea of, ‘Fast hands, strong legs’, is a form of Chinese boxing (provided it’s from China of course).

Our ‘Basic stance’, certainly when combined with Siu Lim Tau, allows us to train all the muscle groups within our legs, especially the adductor muscles on the inner thigh, a muscle group you are usually familiar with after lots of swimming using the breast-crawl, or, should you try to recover your balance having just slipped on ice!

This then brings us nicely on to the name:

The Chinese character for two is a short horizontal line, with a longer line underneath.

Looking down at your feet (While in your stance), if you draw or imagine a line between your toes, this would be the short line, drawing the same imaginary line between your heels would create the longer line underneath, hence the ‘Character two’.

Adduction basically means, ‘To pull to a central point regarding muscle use’ or direct from the Cambridge dictionary, ‘The movement of a part of the body towards the middle of the body or towards another body part’ (the knees to knees).

Try to think, Adduction – To pull together and, Abduction – To take away, and this gives us the interpretation, ‘Character two adduction stance’.

As a literally translation though, ‘Yee Gee Kim Yuen Mar’ translates as;

Now the character two element of this translation remains the same, but where does the goat come in!

There are two stories to give you here, the first being more likely than the second.

Imagine someone trying to force you through a doorway that you simply did not want to go through.

You may choose to hold your arms out to the sides, holding on to each side of the doorframe.

This could be the action of humans, whereas animals however cannot do this, as it would break their breastplate.

Therefore, should you try to pull a goat (Why? You decide.), the goat would resist by digging inward with its front legs, just like a dog not wanting to go for a walk.

So I give you, ‘Two Character Goat Grabbing Stance’.

Now I did say there were two stories for this..

The second story involves fishermen, one of which who was a supposed Wing Chun practitioner, and they went out to sea, taking a goat with them (I only hope it was for milk?).

Anyway, their boat hit rough seas, and with the goat being tied up on deck at the very front of the boat, the crew were worried of losing it over the edge, so APPARENTLY the ‘Wing Chun’ fisherman went out to the front of the boat, and held the goat between his legs, in a tight Yee Gee Kim Yuen Mar, staying there until the storm died. 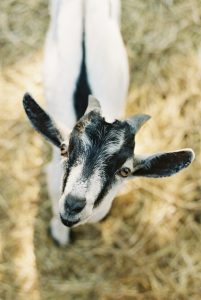 I’D TAKE THE GOAT INSIDE!

Please note that no animals were harmed in the writing of this blog.

I’m guessing the ship in the clips below WAS NOT the one our heroic Wing Chun fisherman held the goat on.