While still enjoying my break in the Isle of Harris I had a wonderful walk along the beach where I stopped to watch the waves rolling in and out and splashing against rocks.

I took this photo while I was there… 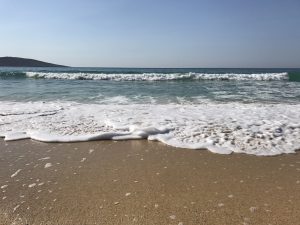 Without meaning to have these blogs sound like sermons (Dearly beloved) I couldn’t help but see the Wing Chun in this too.

We’ve all heard Bruce Lee talking about being like water, to have to ability to mold to anything, while being soft and yet having the power to break rocks.

Well, this was just the thing going through my mind while watching the waves, this constant rolling in and out, or if you like, the constant repetition.

Now, it is not the power of a single wave that has changed the shape of rocks but the constant drilling of the same move over and over, through years, decades, centuries and millennia.

This brings home the importance of training the same technique over and over, and to quote Bruce Lee:

Going back to the waves rolling in and out for a moment, each time they did this I felt it was like a student learning the ‘Wing Chun System’, going through this journey once as it were, believing that just because they have learned the pattern of all the forms that they are now some sort of a master.

So what do we do once we’ve completed everything?

Repeating this cycle over and over, with each new beginning bringing new enlightenment, opening your eyes to things you simply DID NOT GET the first time around, or even the last time around.

I cannot remember who said it but..

Do not be trying to see how fast you can learn Wing Chun but how much you can understand it.