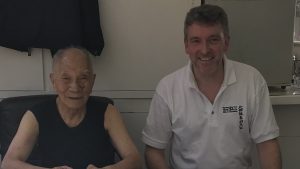 I’ve lost count of the amount of times I’ve visited Hong Kong, so much so that for decades now I have considered it my second home.

When I first started going there they were still using rickshaws!

The harbor has grown further and further out to sea and the buildings on it growing ever higher and higher.

This is not to say I did not enjoy myself, of course I did, because I was there to visit with my family, my Kung Fu brothers/sisters, and of course my Sifu, Ip Chun.

Our hotel was based on Hong Kong island itself, so luckily away from the most affected areas of trouble, although this did not stop the feeling you were constantly being watched, while hearing chants and veiing a steady flow of flashing blue lights. 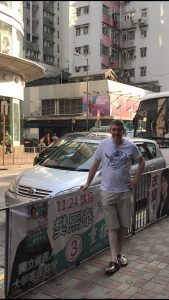 Outside my hotel, notice the watch tent in the background,

this was the only way I felt comfortable taking a photo of it.

As a general tourist I must admit that the daily reports from our travel operator would not sound like the most inviting news;

‘Stay out of the MTR (Subway), do not go to shopping malls, do not wear black or white, and avoid crowds’

Have you ever been to Hong Kong?

Originally I had planned to take a group of my students for one week but the opportunity was presented to me to enter a competition over there one week earlier, and as I have never entered one before (or seen one), I decided to enter.

Unfortunately the thing was cancelled the day before our arrival, due to the riots closing the MTR and roadblocks preventing taxis from running in that area. 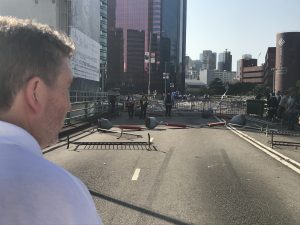 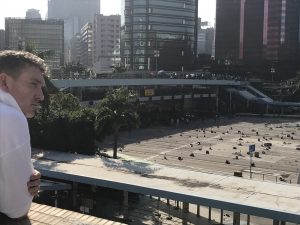 Anyway having said all that, the outcome was that classes were quiet and our itinerary did have to change a little to accommodate, but the only way this really affected me was allow more time training with Sifu Ip Chun.

One day we played Chi Sau for what I though was about five minutes, but when we finished, the person videoing it said there was nearly a quarter of an hour recorded.

Just to remind you, Ip Chun is 95 years old!

I also got to roll with my seniors, something I have not done for many years and which was a wonderful experience.

Subway stations were burnt out, traffic lights smashed, roads blocked and pavement bricks dug up for use as missiles, but the VTAA luckily remained the same (only the occasional evening class being cancelled due to the schools location being around the corner from a police station). 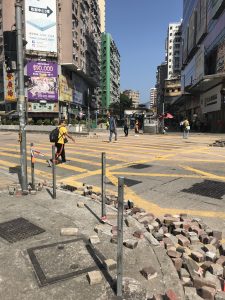 In part two I will share with you some more photos and experiences I had before the rest of our group arrived.