Why Do Families Not Get Along?

We should all get along with each other, not only in Wing Chun but in life too.

We are all one family, so let’s get back to behaving like one.

My thoughts behind this go back to my earliest long term Hong Kong training visit, a five month stay at the very start of the 1990’s.

I first walked into the Ving Tsun Athletic Association, Nullah Road, in the Prince Edward area of Kowloon to see a group of Wing Chun Masters gathered around a table, drinking, smoking, chatting and laughing.

Master Ip Chun saw me enter the room and called me to the table, stopping everyone to introduce me as I approached.

The first person to greet me, twisted toward his left side, still in his chair, outstretching his right hand to me over his left shoulder, as I went to shake this hand I discovered it was holding a can of San Miguel beer,

The hand just greeted me with a beer and a smile belonged to Master Wong Shun Leung, Ip Man’s first student.

To let you into a bit of a secret, and also a little of an embarrassment, but it wasn’t until the passing of this wonderful man in 1997 that I became aware of the fact that it was he, who taught Bruce Lee!

Yes of course Ip Man was Bruce’s teacher but most of this work was passed on to Master Wong to do for him. I imagine my lack of this knowledge and never once mentioning Bruce Lee, was the reason we got along so well. 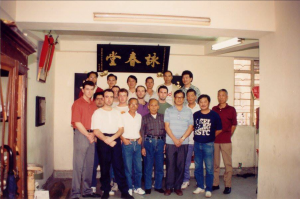 (If anyone has been to visit the VTAA, you will know that behind us are now windows and to my right is the Ip Man bust.

Back then we had very few windows, no fans and definitely no air-conditioning)

It is a wonderful testament to the Ip Man family that to this day, several of his most senior students still teach in that same room, sharing to space equally for their own class times, with courtisy and respect for each other, just the same as they did from when they first moved in there back in 1968.

Something unfortunately I simply cannot imagine happening again these days.

Now with all families, it’s fine for people to have opinions, and to show a little artistic flair with their style, but when people start changing things to suit their own needs there is always a chance of confusion (especially within students).

I am of course referring to Ip Man’s quote, “Anyone can add on to a system, the secret is to try take something away, and still keep it pure”.

I am often asked why different teachers, from the supposedly same Ip Man lineage, look so different to each other in their Wing Chun?

Well this is something I have written about before but without wanting to repeat myself, here goes again (Oh, and if this first part reads a little familiar, that’s because it’s taken from an old email (July 2016 I think)):

Firstly what I would say is that Ip Man obviously taught his own eldest son his purest form of Wing Chun, and that my friends, is obviously Ip Man Wing Chun.

What do I mean by, ‘his purest form of Wing Chun’?

It is also commonly known that Sifu Ip Chun did not start his training ‘for real’ until he was 37 years old.

Now some will want to create an argument by saying that his Wing Chun is probably not that good then, but look at it this way, when I started teaching full time back in 1991, I reckon I was rubbish, I didn’t fully understand what I was teaching and probably passed it across even worse.

Personally, I imagine if Ip Chun had started his training when he was just 10 years of age, his Father would still have been working the Wing Chun system out himself!

When Sifu started training (at 37 years old) it was at the purest level of Ip Man’s teaching.

As for people looking different and yet being from the same lineage?

There are 2 reasons for this

Wing Chun is designed to mold to the individual and therefore should the teachers character drift into their approach to the style then so be it, and therefore the outcome may look slightly different.

The second reason is a little more controversial.

Let’s imagine I am a teacher of Wing Chun, no one has heard of me (I know, crazy idea but stay with me), now if I teach for twenty years, gaining ten students each year, during which time I become world famous, but then suddenly pass on, many of my students (after mourning) are then faced with a decision:

It is fine for the longer-term students who had covered everything in the system with their Master, but what about those who only studied for a short time?

They now find themselves in a bit of a situation, they can truthfully say that they are a student of Ip Man and begin teaching under his name (even with limited knowledge) or continue their studies with someone else.

If they continue their studies with someone else they can no longer claim their school as a Ip Man students, and if they just open a school anyway, with their limited knowledge, at some point a student will have questions which will only be dealt with by made up answers.

The outcome being, a legitimate Ip Man student that looks very different to everyone else.