Dressed For The Occasion 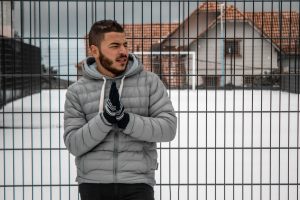 I’d like to start this blog with a question.

What do wear when you’re at class or when training in general?

I’m guessing that the answer will be along the lines of T-shirt/sweatshirt, tracksuit bottoms and trainers, or perhaps even T-shirt and shorts?

The reason for this attire is that you are usually dressed comfortably and for the occasion, but why not ask your training partner, or even your teacher, if one night at class you can mix things up a little by changing your dress code.

Start with a simple idea of leaving your coats on for Chi Sau, because it’s the easiest thing to play Dan Chi Sau or Lap Sau Exercise when you’ve bare arms but not so easy to Lap when your partner is wearing a Puffer jacket!

This does not mean to say that if this doesn’t work as well as it did before, that your Laps are rubbish, it just means that we need to understand that not every block fits the hole.

So what do we do if we’re not in a position to Lap?

Don’t Lap, it’s as simple as that, this is why we train alternatives.

Future changes may be turning up to class in a suit, leather soled shoes, tight jeans etc. and see how this affects your footwork and your kicking ability.

Change if further again to wellington boots and a winter coat to understand the restrictions in kicking or maybe the benefits of being unlappable (if it’s not a word, it is now).

Maybe even mix it up were one person is dressed for training and the other one isn’t?

When you are both dressed up like the Michelin man attacks may need a bigger swing (from the non Wing Chun person) and even the choice of counter attack from the Wing Chun side may need to differ.

Blocks may seem easier due to having the extra padding but the strike could have a negative affect, you may need to change your tactics, a punch to the solar plexus may simply not work against fourteen layers of clothing!

Head-butts, elbow strikes and kicks to the knee etc. may be more preferable.

Wong Shun Leung once said to me,

‘He did not believe in training Biu Gee, the 3rd form (with it’s primary objective being to teach you how to recover centreline should it be lost through overcommitting), because if you train the 1st and 2nd forms properly you will not make any mistakes.’

Obviously I bowed to his superior knowledge and did not question his point, however, and I truly mean this with the greatest respect, mistakes by their very nature are not usually your fault.

Train as precise as you wish but always be ready for a mistake (that’s why we have Biu Gee) such as:

It was very dark

The place was crowded

I had a big coat on

The floor was slippery

I couldn’t kick in those trousers

Had too many beers

In short, a simple change of attire will change your fighting ability, so it’s not a bad idea to get familiar with this.

Give it a try; if nothing else it will be fun.