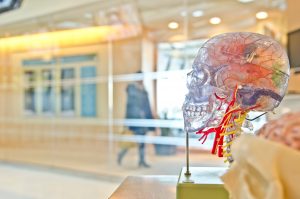 Brain power, not brute strength, may explain how karate experts can break bricks with a bare-handed strike, according to scientists who say years of martial arts training alter the organ’s wiring.

Researchers in Britain compared the short-range punches of a dozen karate masters to those of 12 physically fit novices and found the black belts’ secret lay not in muscle power but an ability to coordinate the peak velocity of their shoulder and wrist.

This allowed higher acceleration and a bigger impact force, the scientists say in the latest issue of the journal Cerebral Cortex.

The scientists then scanned the two groups’ brains, and found that those who threw the bigger punch had changes in the structure of their white matter, which transmits signals between the brain’s processing regions.

The longer they had been training, the more changes.

“The karate black belts were able to repeatedly coordinate their punching action with a level of coordination that novices can’t produce,” study co-author Ed Roberts of Imperial College London’s medicine department said in a statement.

“We think that ability might be related to fine tuning of neural connections in the cerebellum (the part of the brain that governs motor control), allowing them to synchronise their arm and trunk movements very accurately.”

Scientists believe that through the process of learning a skill, patterns of brain activity adapt as performance improves.

Now they believe they have also found proof of changes to the actual brain structure.

“This has implications for our understanding of the role of white matter connectivity in motor coordination,” said the paper.