Are You Using The Same Defensive Moves In Sparring? 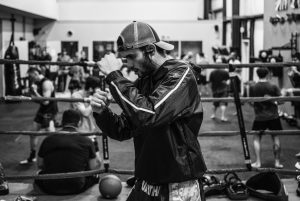 Do you keep getting the same attacks?

Have you ever thought how when you’re sparring, that you seem to be repeating the same moves?

I see this often with my students and of course I would explain to them to try to mix it up a little, asking them:

“Why are you doing the same move every time?”

The answer is nearly always the same…

“Because THEY keep doing the same strike”

Now there may be something in this, but we need to go further back and ask ourselves, WHY are THEY throwing the same attack every time, usually because YOU are presenting the same guard every time.

By doing the same guard you MAY be only offering one line of attack, ergo you have to use the same defence.

Is this the answer then?

Should we keep the same guard every time in order to ‘set up’ the easiest strike and therefore always be prepared?

Simply because sods law will dictate that at the time of a defensive response you will most likely have a different hand position and not be used defending from this side.

If you DID know there was going to be a real fight, what the hell are you waiting for?

So when you are sparring, change your guard, put yourself in awkward positions, keep moving your arms in such a manner that when the attack is thrown, you will not know exactly where your arms are going to be having to defend from, THAT will train you far more than just always going to your default setting and repeating the same thing over and over.