An Old Question Regarding JKD 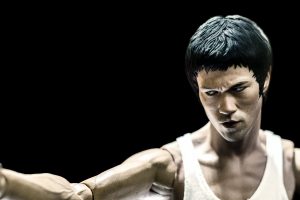 An icon to many Martial Artists

This question was put to our private Facebook group by one of our students in 2018:

‘Would any of you consider Jeet Kune Do, to be  a modified style of Wing Chun?’

Some people felt that I should share my answer, so here goes:

Personally I am not so keen on Jeet Kune Do because everybody just wants to be like Bruce Lee, which is not so bad, it’s just that in MY opinion, they’re going about it ALL WRONG.

When you’ve finally, ‘Learned Wing Chun’ (a sweeping statement I grant you), let’s say you’ve now acquired, well let’s say, ALL fifty techniques (blocks, strikes, weapons, attitudes, whatever) the truth is, you will only ever choose ten or twelve of these to suit your needs, without you knowing, ones that are your favorite, and that you personally CAN DO WELL.

This is what Bruce Lee did.

When Bruce was living above Suzie Wong’s restaurant in San Francisco, he needed money and so called Ip Man to ask if he could teach Wing Chun, the answer was NO!

Back then if you were Black, Irish or Chinese you were thought to many as 2nd class citizens and Ip Man did not want this style sharing with Westerners, so he told Bruce that if you do teach, then it should be a watered down version, and do not call it Wing Chun, but to name it after himself, Jun Fan (Bruce Lee’s real name).

Later when Bruce started accepting students, he took a boxer, a judo practitioner, a karate guy, and so on, he said:

“I want you to teach me what you know, and if you learn anything from me along the way then ok”.

He didn’t want to learn the styles but how to defeat them, all very clever really.

My point is this, when everybody saw Bruce Lee and how good he was, all they ever really saw was ‘HIS’ ten or twelve and when he created Jeet Kune Do and started ‘teaching‘ Wing Chun, he only ever taught HIS ten or twelve.

Now if these people really wanted to be like Bruce then they should learn the WHOLE fifty techniques for themselves and then be able to choose THEIR OWN ten or twelve. 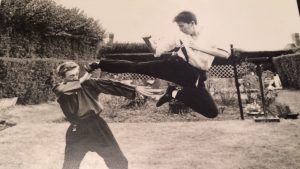 NOT, something I teach in my Wing Chun classes

Just because I could do it, doesn’t mean I should teach it

It is very hard to ever find someone willing to teach all of Wing Chun, and properly, without bias or personal gain, understanding that just because THEY may not believe in a particular technique or in some cases maybe even cannot do that technique (I’m referring the the remaining 50 that the instructor may not be good at), that one of their students can.

This is what I promised Grandmaster Ip Chun I would do, because if I do not, eventually the system would dissolve into nothing like it was meant to be.

So if one day you yourself decide to coach or even teach, you must allow your students to have the same chance as you had, use this site, let them be taught pure Wing Chun with you as their guide.

Until such a time as you wish to tell the tale in your own way. 🙂