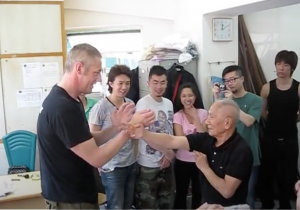 The reason I chose this title, ‘A New Year, A New Approach’ was because I wanted to address, not the approach to your general (training in the search of perfection), but an approach of realising that not only can something be played ‘Off grid’, sometimes needs to be.

Something I mentioned in Part 1 of this post was the idea that:

‘Have you ever tried to play really well in Chi Sau against someone who is far below your abilities,

and yet they still seem to be getting in and causing you no end of trouble?’

I also used the phrase:

In most cases, it is the fact that you are trying to keep to the rules when your partner is not.

This is why I say that basics are essential and MUST be fully understood, however, by that same token we must also know when to relax them in order to make YOUR Wing Chun work for YOU, otherwise those basics which we valued so much initially, will only serve to be a weight on your shoulders.

I mentioned how I’d noticed a couple of our newer members, who were throwing attacks and using footwork, in a, let’s say, unconventional manner, or, not as Wing Chun should be, and were causing a couple of my seniors some concerns.

In the last blog I looked at these ideas in Chi Sau, in this post, I’d like to address footwork.

One of the things I witnessed being a problem , was during Pak Sau drills, when the new guy was stepping in way too far and smothering a senior, the fact that I witnessed a similar concern with three different pairings, made me want to address this in more detail.

Now the reason this was such a problem, was again because:

In most cases, it is the fact that you are trying to keep to the rules when your partner is not.

The problem here was that we had a senior trying to stand his ground, as may be the idea behind the drill, and the newer member having little awareness of keeping or understanding a good sense of range, but once again, he was still getting in!

So why was this and what should have happened?

Well firstly let’s look at the defence of this ‘Smothering’.

There are only five types of footwork in Wing Chun:

And no matter what position you find yourself in, you will always be using one of these five, either individually or as part of a combination.

These areas of footwork may be used in a certain manner for a certain practice, let’s say:

But just because they may be trained separately and with different attitudes, it is imperative that we understand how they work together, and why.

So if you are training Turning Tan/Punch against a strike, and you feel that your opponent has stepped in more than expected, then rather than just turning, move back also, using the mentality of the SBM.

Likewise, if in a Pak Sau drill, your opponent steps in too far, therefore smothering you, there is nothing wrong with your using Biu Mar to shuffle back a little, again using the mentality behind the SBM drills.

I am not saying that it is ok for me to allow the beginner to continue to step in so far, purely because this is wrong, or to word it better, in this case it was unnecessary, why, because the attacker in this case was much taller than the defender.

By this I mean there was no need for him to step in so far in the first place, for two main reasons:

One – This would take longer to try to cover such a distance.

Two – You have just placed yourself in the range of your opponent, losing what was a previous advantage.

Every year I go to Hong Kong to visit my Sifu (GM Ip Chun) and to train with my fellow brothers and sisters at the VTAA, this I have done since 1991 with possibly fifty plus visits, and over that time taken hundreds of my students with me.

On one occasion I had with me one of my senior instructors, Sifu Matt Isaacs, who happens to be 6′ 7.5″ and he was invited to play Chi Sau with Master Ip Chun, who I might add is about 5′ 4″!

The game was great fun and enjoyed by all, however it was a comment by Sifu that caused great interest, and that was when he said:

“You are very tall, why do you not use your reach more?”

On reflection this seems obvious, but at the time it was a given that Wing Chun is primarily designed for the smaller weaker person against the bigger stronger opponent, and this is still true of course, however there is no reason why you should not be using your advantages when they are presented to you, after all, is this not helping to make YOUR Wing Chun work best for YOU?

So you see where to two conflicting issues lay within the initial, ‘Stepping too far in with the Pak‘.

First of all the attacker did not need to step in so far, as it would in fact be taking away his advantage AND possibly placing himself in danger.

The second part of this was that whether someone steps in perfectly or not, as the defender if is not only your responsibility to deal with the problem (there and then, and without thought) but also to allow yourself to go away from the basics in order to make your defence work, FOR YOU.

So I guess in this case, two wrongs DID make a right.

We all want the best for our Wing Chun and we all want to train for perfection, but before we just go ‘Correcting‘ what is wrong, let’s better understand that wrong and why, or even IF, that wrong needs changing at all.

Thank you for reading.